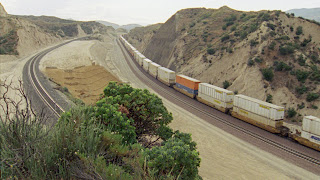 Texte zur Kunst no. 82 (June 2011), an issue on artistic research guest-edited by Tom Holert, contains my review of Allan Sekula and Noël Burch's film The Forgotten Space, which was finally completed last year after an extended stay in development hell. The Forgotten Space is a filmic continuation of Sekula's Fish Story project, and investigates the impact of container shipping in Europe, the US and Asia, charting the "forgotten space" of the ocean and ports. My text relates The Forgotten Space, as a Marxian essay film, to recent film projects by Alexander Kluge (Nachrichten aus der ideologischen Antike) and Hito Steyerl (In Free Fall).

In related news, New Left Review no. 69 (May/June 2011) contains some of Sekula and Burch's notes for the film, and issue no. 21 of Open, which is dedicated to the topic of  (Im)mobility, features an essay by Brian Holmes on containerization which is accompanied by stills from The Forgotten Space.