A Prior: Erik van Lieshout

Issue no. 12 of the magazine A-Prior, which was published in March 2006, contains my short text “Erik Van Lieshout’s Video Shacks” (pp. 6-9) discusses the installations in which Van Lieshout screens his videos. An extract:

“In the 1960s, the rise of Minimalism led to increasing references to 'the beholder', or sometimes the 'the viewer' or 'the spectator', in writings on contemporary art. Since the physical experience of the work was an essential part of Minimal art, art critics created a disembodied and universalized spectator to represent the 'typical' response to Minimalist works. An artist who not only participated in but also reflected on the emergence of art that demanded a physical response was Dan Graham: with his use of video cameras and monitors, glass, and one-way and two-way mirrors, Graham subjected the viewers to a series of tests, both making them aware of the other viewers and suggesting that 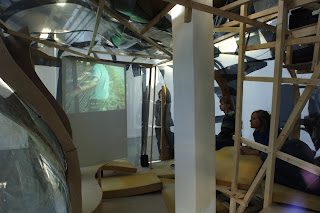 Van Lieshout's video installation Happiness (2004) recalls some of Grahams work, especially his 1981 Cinema project and his pavilion structures. Van Lieshout's construction looks like a cheap knock-off combining elements lifted from Graham and Frank Gehry: it consists of a wooden structure supporting an undulating skin which is transparent from the inside but mirroring from the outside. Standing inside the structure, watching the video, one can also watch the surrounding area and see if anyone is approaching. The video focuses again on Van Lieshout and his brother; this time, the siblings are not on Rotterdam's mean streets but in the countryside, in the sylvan surroundings of a psychiatric institution, where they - especially the brother - are grappling with their dysfunctional behaviour. Standing inside, watching both the behaviour in the video and the highly codified and disciplined art space and art-world people surrounding it, one is in a strange limbo - Happiness is an impossible panopticon that shows two incompatible spaces at the same time. Like most of Dan Graham's works, and like most Expanded Cinema pieces, Erik van Lieshout's video pavilions are in fact seen by a relatively homogenous group of art-world denizens, but they also point towards the possibility a more inclusive audience.”

The complete text can be found here: http://www.aprior.org/lutticken_lieshout.htm

My book Secret Publicity: Essays on Contemporary Art, a selection of texts from the preceding years, was published by NAi publishers in February 2006 (the book purports to be from 2005, but publication was delayed for a few months) . Through a variety of artists and theorists ranging from Broodthaers to Jeff Wall, Bik Van der Pol

and Tino Sehgal and from Bataille to Debord, as well as more obscure and less canonical artists and non-artists (David Thomas, Wilhelm Reich), Secret Publicity seeks to investigate the art world’s possibilities for creating forms of publicness beside and beyond the spectacle.

“With Duchamp’s readymades, art began to admit that the spectacle is the more successful avant-garde, and that the commodity is the ultimate work of art, an endlessly fascinating mix of logos and mythos. A redefinition of art thus took place: no longer the production of totally independent highbrow goods, art became spectacle-consumption – or meta-consumption, as Boris Groys terms it. This particular form of consumption decodes and recodes the irrational rationality of the spectacle, thereby producing deviant commodities, which are more thought-provoking and productive compounds of logos and mythos.

"The problem is that such characterizations of the possibilities of art tend to degenerate into – or are confused with – an ideologization of art as intrinsically good and noble: the meta-spectacle as the good, critical spectacle. The modern ideology of the aesthetic, according to which art is a privileged domain distinguished in a positive sense from other sectors of modern civilization, has long deteriorated into a kind of good cop / bad cop routine: the ‘big’ culture industry is bad, but its artistic version is good for people, refined, complex – and critical. Just as the critical character of modernism served as a sales argument for medium-specific commodities, the same now applies to the generic commodities of contemporary art. Art may today absorb all the world’s garbage, but it rescues and ennobles the materials it consumes. It is clear that institutions like the Tate and the Guggenheim reduce such pretensions to hypocrisy. In comparison to these satanic mills of the artistic culture industry, Time Warner at least has a refreshing lack of pretensions. Yet the ideology of art, dulling and hypocritical though it may be, also enables practices that could not exist elsewhere. A truth may sometimes manifest itself under the cover of a lie – even if its existence is only ephemeral and marginal. The ideology of art has to be deployed tactically, and if necessary turned against itself [….]. ”

A review of Secret Publicity by Zoë Gray can be found here: http://fillip.ca/content/secret-svengali

A review by Andre Rottmann (in German) is here: http://www.springerin.at/dyn/heft_text.php?textid=1887&lang=de

Particularly interesting feedback came from Jan Verwoert, in Open, but that review is not online.