Things will be a bit slow during the first half of 2011, though some publications (most of them having been underway for some time) will see the light of day. Aside from teaching one class this semester, I'm trying to keep my time free for my next book, History in Motion. Like the sloth, that unfairly named and unjustly maligned animal, the book writer needs to 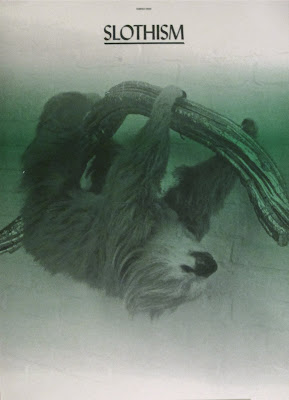 exist in a different temporality, a duration without obligations and deadlines, or at least as few as possible - making slow progress that often seems futile to foreign eyes.

History in Motion deals with the impact of time-based media (film, video and television, live performance) on the representation and the production of history. The book will contain the following chapters, most of them radically reworked and expanded articles: 1. "Transforming Time," 2. "Suspense and Shock," 3. "Playtimes," 4. "Performance After Television," 5. "Art After the Event," 6. "Unnatural History."

Meanwhile, I'm engaged in invisible work on the Autonomy Project, which moves on apace with a second summer school and a large public conference in the fall, from 7 till 9 October at the Van Abbemuseum in Eindhoven. For more information on the Autonomy Project, see http://platformmodernekunst.blogspot.com/. For the fall semester, Eric de Bruyn and I are also developing a joint academic seminar (both at VU University and at the University of Leiden) on film screenings (or film séances,to use our terminology) from the 1920s to the present, which will hopefully be accompanied by a series of public events, and possibly a small exhibition. The project reflects my growing interest in forging connections between different types of intellectual and educational activity: teaching, writing, curating, and the research they all involve.

Additionally, and connected to this "séance" project, I'll be participating in the "Performance in Residence" programme of the curatorial platform If I Can't Dance, I Don't Want to Be Part of Your Revolution. For this programme, a researcher investigates one historical performance during a period of six months, and presents the piece and the research in public. My turn will start in September. Hopefully I'll be able to emerge from sloth time by that point.