Reviews of Idols of the Market have recently been published in Metropolis M, Open, and Texte zur Kunst. Meanwhile, aside from a grant application for a big project, I’m working on another book called, tentatively, History in Motion. This quotation from a film by Harun Farocki gives an idea of its point of departure: “Camera and event. Since its invention, film has seemed destined to make history visible. It has been able to portray the past and to stage the present. We have seen Napoleon on horseback and Lenin on the train. Film was possible because there was history. 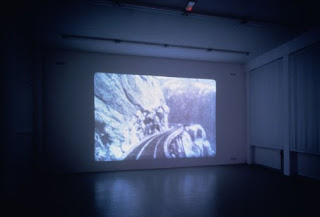 Almost imperceptibly, like moving forward on a Moebius strip, the side was flipped. We look on, and have to think: if film is possible then history, too, is possible.”

Which consequences did the rise of moving images (film and video) have for the representation and the production of history? If film was destined to “portray the past and to stage the present”, as Harun Farocki states, History in Motion wants to focus on the interconnection between these two activities—not only in relation to film, but also in relation to other time-based media, including live performance and its afterimages. If it was traditionally a fleeting presence, the stuff of elusive memories, in modernity the moving image became storable. How does this influence the relation between representation and event, between the time of the image and historical time, and between past history and the history-in-progress of a contested present?

The book’s analysis is mainly aimed at the past few decades, at the post-Fordist phase and its temporal specificities: flexibility, the erosion of the distinction between work and leisure, permanent media presence. However, the temporal transformations of society and culture associated with post-Fordism, dominated by the permanent presence of television and then the internet, but haunted by the afterlife of cinema, will be related back to earlier shifts, in particular to late-nineteenth and early-twentieth-century capitalism—the early years of film.

This probably gives a highly inadequate impression. Analog, concrete thinker that I am, I’m notoriously bad at giving a priori summaries of what work in progress will end up being like. Although I’ve already done a lot of groundwork with various articles—tagged "history in motion" on this blog—things crystallize, dissolve and coalesce during the (re)writing process, and if I knew beforehand what I would end up with, I couldn’t muster the energy to actually do it. Admittedly, this is something of a handicap in a society in which you rarely get credit on the basis of your history – only on the basis of meticulously drafted, carefully planned futures.

A Few Quotations for the Holidays

When I was rereading Debord and Sanguinetti's 1972 Theses on the Situationist International and Its Time shortly after the meltdown of the Copenhagen climate conference, I came across some passages that simply demanded to be posted:

"The recent appearance in the spectacle of a flood of moralizing speeches and pledges of retail solutions to what governments and their mass media call pollution, seeks to hide, at the same time that it must reveal, this obvious fact: capitalism has finally delivered proof that it cannot develop productive forces any further. It is not however quantitatively, as many people thought it necessary to understand, that capitalism will have proved incapable of pursuing this development, but qualitatively."

"The society that has every technical means to modify the biological foundations of the whole of life on earth is also the society that, thanks to the same separate technical and scientific development, has every means of control and of mathematically incontrovertible forecasting to measure in advance exactly what the growth in alienated productive forces of class society can lead to - with dates, according to a best- or worst-case scenario - in terms of the catastrophic break-up of the human environment."

"Pollution and the proletariat are today the two concrete aspects of the critique of political economy."