After some delay, the publication collecting the texts of lectures given on the occasion of the exhibition Beyond Cinema: The Art of Projection in at the Hamburger Bahnhof (or to be precise, at the dubious Christian Flick Collection at the Hamburger Bahnhof) is seeing the light of day. According to Hatje Cantz publishers, "Art of Projection investigates the history and current state of the use of projected images in art, moving from the screen to the exhibition space and back again. The volume’s ten essays, written by leading art historians and critics, address preced 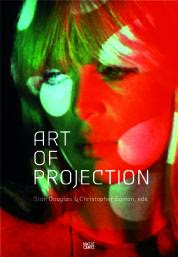 ents for the projection of images in space in nineteenth-century magic lantern shows and world’s fairs as well as the alternative conceptions of duration or the representation of time pioneered by Surrealists and experimental filmmakers in the early and mid-twentieth century. Central to the book is the lacuna between the development of Expanded Cinema in the seventies and the resurrection of many of its techniques in video installations of the nineties: two generations of artists who shared a desire to create experiences of space and time that were an alternative to the conventions adopted and promoted by the culture industry."

Although I did not attend the conference, I contributed a new text to this publication, edited by Stan Douglas and Christopher Eamon. My essay Liberating Time analyses the discourse surrounding film and video art since the 1990s, in particular the claim that such art presents a more liberated and liberating or purer temporality than mainstream film. The essays also goed back in history, to Deleuze and Godard as well as to Dadaist and Surrealist cinema, in order to ask the question how a true liberation of time might be conceptualized and realized. In a break with my habit of putting the openings of my texts on this pseudo-blog, here's the essay's conclusion, which in a sense is the starting point for work I plan on doing in the near future:

"Writing in prison in the early 1980s, Antonio Negri stated that capitalism tends to reduce all labour to a merely quantitative, measured time, to a state in which “Complexity is reduced to articulation, ontological time to discrete and manoeuvrable time.” A truly liberated time, Negri avers, would break with this regimentation in favour of qualitative and collective production. “Liberated time is a productive quality. It is a productive rationality torn away and isolated from the command that analysed this rationality and extorted it from the time of life.” The art world offers no possibilities to sustain such a production of liberated time; at worst, it ideologizes the present conditions of production while appearing to offer alternatives. While this are reasons for wariness, there is no excuse for defeatism; although the art world’s keenness on celebrating boundless and infinite “potentialities” should treated with as much suspicion as the speeches of used-car salesmen, this is not to say that Adornian mourning over foreclosed possibilities is all that remains.

"At best, art can offer models or presentiments of such a liberated time. Galleries, museums, magazines and other publications offer fragile possibilities, open momentary windows of opportunity, however compromised they are, and precisely by acknowledging this compromised position - for instance by forging an impure montage between gallery time and less fortunate and privileged temporalities. One example of such an approach is a 1972 slide piece by Allan Sekula. In Untitled Slide Sequence, Sekula shows a stream of workers leaving a factory, coming towards and past the spectator in black-and-white images that show momentary cuts from the steady stream of movement. The piece updates the legendary “first film” of the Lumière brothers, in which workers come through the gate of the Lumière factory in Lyons, but it swaps the static frame for a more unstable point of view, as the photos are taken from slightly different spots on the top of a flight of stairs climbed by the employees, who are seen walking towards the camera. For Sekula, early cinema is not primarily a promesse de bonheur as it is a moment in the formation of m 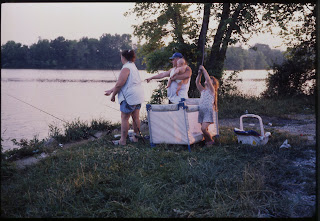 odern industrial production and its regime of “discrete and manoeuvrable time.” However, by transforming the first film with its rather sudden and massive factory exit into a slide sequence that presents men almost floating past a somewhat erratic camera, Sekula transforms industrial clockwork time – without denying its hold on people’s lives.

"A more recent colour slide piece by Sekula, Prayer for the Americans (1999/2004),is a kind of pilgrimage on the tracks of Mark Twain, “America’s original anti-imperialist, conveniently mis-remembered as a ‘humorist’ and chronicler of lost boyhood”, in a landscape which is both historical and a disneyfied travesty. In a stunning sequence within the larger slide sequence, an obese white working-class family is fishing on the banks of the river, in picture after picture. In stretching this sequence to a degree not seen anywhere in Prayer for the Americans, Sekula forges a link between fishing and art viewing, between the time of people who are considered to be among the losers of today’s capitalism and that of those who are often seen as its avant-garde, between White Trash in the American South and the dynamic project-based denizens of the art world, of whom it can indeed be said that “the entire time of life has become the time of production”, with the result that many are lacking the time to adequately experience all those alternative durations. The promesse de bonheur of Sekula’s fishing sequence is acute and unsettling; it lies not in the images as such, but in the montage of two kinds of slowness, rural and post-industrial. Its slices of frozen motion briefly liberate the art of projection from its own ideological blind spots."