Summer is taken up not only by work on my book-in-progress, but also by activities triggered by the dismal political situation in Holland. With Jorinde Seijdel and Merijn Oudenampsen, I'm working on an "emergency issue" of the journal Open, whose existence is under threat. This special issue will come out in September and be distributed as a supplement to a Dutch weekly.

Meanwhile, in other news, I have contributed more or less monographic essays to two upcoming publications. I don't write a lot of such texts, and one reason is the insane pace at which many exhibition catalogues and related publications are put together - with the commissioning of essays often being something of an afterthought. In the case of these publications on Stan Douglas and Gerard Byrne, the whole process was fortunately more professional and the time frame more generous. Stan Douglas: Abbott & Cordova, 7 August 1971 is a book that focusses on said photograph by Stan Douglas, and my text "Performing Photography After Film" investigates the interplay of media in Douglas's work and the dialectic of (immaterial) image and its concretization or "performance" in the form of a (material) picture. The book also includes an essay by Serge Guilbaut and a conversation between Stan and Alex Alberro. 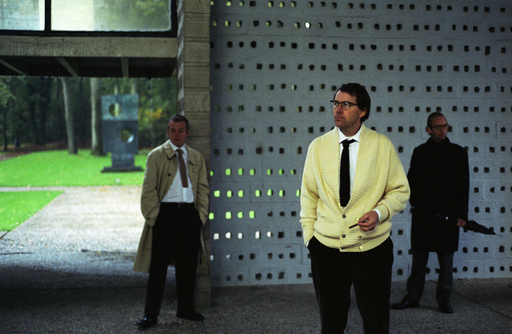 Later this month a Gerard Byrne retrospective will open in at the Irish Museum of Modern art, and later it will travel to Lisbon and London. At one point the Kröller-Müller Museum, where part of 1984 and Beyond was shot (see image), seemed to be interested in bringing the show to the Netherlands, but this seems to have fallen through. What a surprise. The Kröller-Müller truly is heaven—if one's definition of heaven is the one given by Talking Heads in their song of that name. The catalogue is titled Images or Shadows. Rather than attempting to represent the work in question in the usual manner,  this publication examines it by deconstructing and rearticulating it in the form of a dense network of texts and images, including many reference images, complete with captions written in a mid-twentieth century magazine style. There is of course the danger of self-congratulatory referentialism, of slyly suggesting "importance by association," but the choices and combinations are sharp enough to generate an interplay, a dialogue, that itself takes on a real critical quality.

As editor Pablo Lafuente puts it in his meta-foreword: "All these works, the texts printed in this book and the images that accompany them present, hopefully, more than a set of intertextual references, quotations and allusions to literary, artistic and intellectual history, but a transtextual range of articulations that show not only how a work can explicitly refer to bother, but how it can also elaborate, expand, modify or transform the grounds where it stands."My essay, "Gerard Byrne's Talking Pictures: Different repetitions in New Sexual Lifestyles and 1984 and Beyond," obviously focusses on these two works and on their intervention in the shifting relation between the printed and the spoken word, as the Gutenberg Galaxy fades and a new orality and performativity gain strength.

A somewhat different version of this essay is included in Witte de With's Cornerstones book, a collection of more or less monographic essays, many of which (though not mine) have been delivered as lectures at Witte de With.