Texte zur Kunst no. 75 (September 2009) contains my review of The Bijlmer Spinoza Festival, a project that took place in the Bijlmer (Amsterdam) during the summer of 2009, which involved daily lectures and performances taking place in a pavilion that also included a Spinoza exhibition and a library. The location, the Bijlmermeer or Bijlmer, is a post-war banlieue of Amsterdam with a large Surinamese population. 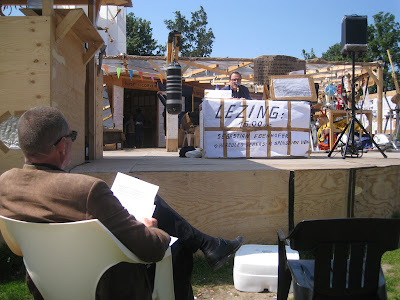 The review discusses this piece in relation to previous Hirschhorn works, such as his 1990 Spinoza Monument and the Bataille Monument at Documenta 11, as well in the context of the contemporary socio-political situation in the Netherlands.

"If Spinoza is currently something of an event in Holland, it is mainly because he is seen as a philosopher of tolerance and democracy. Ironically, in the current Dutch culture wars the accusation that Muslims cannot be proper democrats because they believe in the edicts of a radically transcendent God has become a favorite weapon for Pim Fortuyn’s heirs; right-wing populists like Geert Wilders, who are intent on aggravating oppositions and tensions as much as possible, are not above demanding a ban on Qur’an or the deportation of Muslims. Little wonder that Spinoza has been embraced by Amsterdam’s mayor, Job Cohen, who routinely gets flack from Holland’s strong right-wing populist front for not being “tough” enough on immigrants, especially Muslims. Cohen has been much maligned by right-wingers for stating that when his aim was simply 'to keep things together' ('de boel bij elkaar houden'), i.e. to prevent the city from imploding or exploding socially. It almost seems as if Hirschhorn translated this into literally making sure that things do not fall apart: every day, his signature brown tape was used to make sure that things (and, by implication, people) stick together.

"During the Q&A following his talk, [Toni] Negri was asked his opinion about Hirschhorn’s 'precarious aesthetics': Can such an esthetique de précarité bring art and politics together? The issue of the political connotations – let alone possible political efficacy – of Hirschhorn’s formal means is too complex for a succinct answer, which Negri consequently did not give. One the other hand, when arguing that from a Spinozist perspective the state is an expression of un pouvoir that comes from among us, Negri pointed around to the pavilion and said 'comme ici.' Things are perhaps not quite as clear-cut. Dutch public art ideology is based on the quasi-Schillerian desire to mediate between the abstract logic of the state and the realm of sensuous being, of people’s lives; however, critics argue that in the end public art often merely functions as symbolic flag that is draped over social problems, in lieu of an actual political engagement with them. That the state and its organs initiate so many public art projects seems to suggest that this state is precisely not 'comme ici', that it suffers from its lack of immanence. Seen in this light, Hirschhorn acts as the outsider who, as a free agent, helps the Dutch cultural bureaucracy to fulfill its fantasy—and who, in realizing the fantasy, goes beyond it."

Issue no. 8 of the e-flux journal contains my short essay "Viewing Copies: On the Mobility of Moving Images." These are the opening paragraphs:

"An artist once paid a critic back for lunch by handing him a viewing copy of a video work, adding that this should be more than enough—after all, the piece was worth 25,000 Euro. Both were in on the joke, of course; both knew that a DVD viewing copy of an art video is worth even less than an empty new DVD. In a way, viewing copies do not really exist—their spectral status is owed to the art world’s economy of artificial scarcity and the severe limitations it imposes on the movement of images. Aby Warburg once called Flemish tapestries—early reproductive media that disseminated compositions throughout Europe—automobile Bilderfahrzeuge. Later media have proven to be rather more 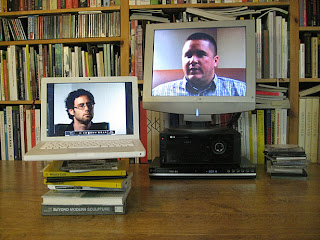 powerful “visual vehicles” capable of being produced on a Fordist assembly line. But rather than have the work travel to the viewer—an increasing tendency throughout the nineteenth and twentieth centuries—in the case of video or film pieces in contemporary art the viewer has to travel to the work, installed in a gallery or museum.

In contemporary art, even pieces produced in media that allow for infinite mass (re)production are executed only in small editions. In the age of YouTube and file-sharing, this economy of the rarified object becomes ever more exceptional, placing ever-greater stress on the viewing copy as a means of granting access to work beyond the “official” limited editions and outside of the exhibition context. The viewing copy is the obverse of the limited edition: as a copy given or loaned to “art world professionals” for documentation or research purposes, it can never be shown in public. The viewing copy thus widens the reach of the work of art, but confidentially and in semi-secrecy. It is precisely this eccentric status of the viewing copy within the economy of art—which itself has an equally exceptional status within contemporary capitalism—that makes it an exemplary object, a theoretical object par excellence."

The complete text is here: http://e-flux.com/journal/view/75

Image: one half of a viewing copy of Omer Fast's four-channel projection The Casting.