From September 15, Argos in Brussels will show the exhibition Actors & Extras: "The concept of the exhibition is based on the contrast between the actor and the extra. The dividing line between both is the difference between cognisance and ignorance, pre-eminence and insignificance. An actor represents a process of embodiment, vocality, and the ability to give direction to an activity. An extra is a voiceless figure in a background crowd: a body without embodiment. If the extra, in contrast, embodies anything at all, it is a conflict of location. The tension area between background action as abstract, modulative, and manipulatable human material on the one ha 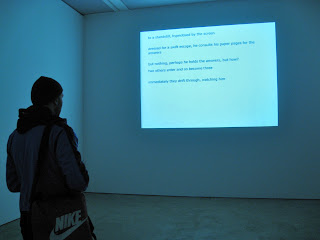 nd, and the consciously acting individual on the other, motives the exploration of social relations of power and the place of collectivity. Works that have the figure of the extra as their subject often have to be read as social and/or political allegories."

For the accompanying publication, I wrote an essay titled "Proletarian Acting." The starting point for this text is as follows:

"The focus in some recent art on the extra, who is called “the silent proletarian of the cinema” in Mark Lewis’s video The Pitch, thus has to be seen as one aspect of a wider questioning of film performance and an exploration of liminal states in performance. In the end, the interest in alternative modes of performance is aimed at transcending the dichotomy between the actor—especially the star—and the extra, and thus abandoning the category of the extra itself. Such a project clearly is of more than merely academic interest in an economy in which work is increasingly redefined in performative terms: rather than selling abstract labour-power, the worker is supposed to sell himself by enacting his or her subjectivity. No longer a classic proletarian, and certainly not silent, this self-performer is the actually existing form of avant-garde models of performance."

The text goes on to discuss a number of films and performances, including work by Allan Kaprow, Augusto Boal, Jeff Wall, and Dora Garcia, in the context of a discussion of the post-Fordist focus on play and self-performance.