My book Idols of the Market has finally taken on physical form. An impression of the contents:

An extensive introduction, "Welcome to the Image Wars", sets the stakes for my a 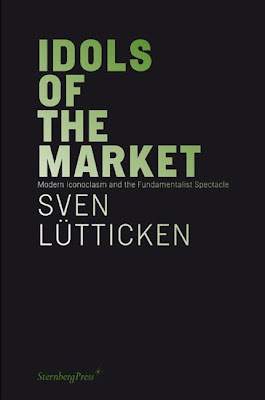 nalysis of the double legacy of the monotheistic discourse on idolatry, in religious fundamentalisms on the one hand and in modern and contemporary art and philosophy on the other; I argue that "secular" critical discourse should not give in to secularist reflexes, but acknowledge ist own monotheistic genealogy, and turn the critique of religion against its fundamentalist appropriation (the latter being itself a thoroughly modern détournement of religious tradition). The first chapter, "Myths of Iconoclasm", continues this analysis with a discussion of various theoretical approaches to (and narratives of) iconoclasm in different contexts.

In chapter two, "From One Spectacle to Another", religious and leftist conceptualizations of the spectacle are scrutinized. The spectacle as a theater of commodities, of capital that has become image, leads to a discussion of the status of the material side of commodities, and of dematerialization, in chapter three - which is called "Atttending to Things (some more material than others)." The modern concept of fetishism, an offspring of the monotheistic notion of idolatry, is central to this part. Chapter four, "Living with Abstraction", argues that the increasingly "dematerialized" spectacle is marked by an increasing concretization of abstraction. Finally, the fifth chapter focuses on that abstract speck in the Western spectacle - the veil, associated with the Other that is Islam, seen by Hegel and many other writers as the religion of abstraction par excellence.

Idols of the Market will be for sale at the Venice Biennale bookstore, and soon elsewhere.


A correction: Arriving a bit too late in the last volume of Guy Debord's correspondence (covering the years 1988-1994), I found out only now that the attribution of the phrase "Rome is no longer in Rome" in the English translation of Guy Debord's Comments on the Society of the Spectacle to Racine is incorrect; the phrase is by Corneille. Debord's remarks on the matter seem to have confused the translator, Malcolm Imrie. The phrase is the motto of my second chapter.

Language in the Vicinity of Things

Whereas this is a pseudo-blog that I use to document my publications and the occasional exhibition, I decided to start something that resembles a proper blog, even if the resemblance in question is perhaps of the Cubist variety. It's called Language in the Vicinity of Things, and can be found at http://sventhings.blogspot.com

Edit: after a few weeks, I can already tell that I would have to take self-exploitation to dangerous extremes in order to do this properly. I deleted the "real" blog and will stick with this one.

In collaboration with the Kunsthalle Zürich, the Kunstverein München, the Museum of Contemporary Art, Chicago, and Witte de With, Rotterdam, MIT Press has published a "critical reader" on Liam Gillick in lieu of a catalog. Expertly edited by Monika Szewczyk and titled Meaning Liam Gillick, the book collects texts by Peio Aguirre, Johanna Burton, Nikolaus Hirsch, John Kelsey, Maurizio Lazzarato, Maria Lind, Benoît Maire, Chantall Mouffe, Barbara Steiner, Marcus Verhagen, and myself. Oddly enough, the curators/directors Stefan Kalmár, Dominic Molon, Beatrix Ruf, and Nicolaus Schafhausen are listed on the book's cover in exactly the same way as the aforementioned authors and the editor, even though they only contributed a joint foreword of less than three pages. Only in the art world...

My essay, "(Stop) Making Sense", analyses the way in which Gillick employs discursive elements and the notion of the discursive itself. It also reflects on its own compromising context:

"In Fredric Jameson’s words, the public sphere constantly demands a traffic in tokens that it terms ideas, but which are really “idea objects,” commodified fragments of theory—a production of ideas along the lines of Fordist car production. Some forms of discourse offer less resistance to this mechanism than others; and are some not in fact tailor-made for this process? Can the three-dimensional textual 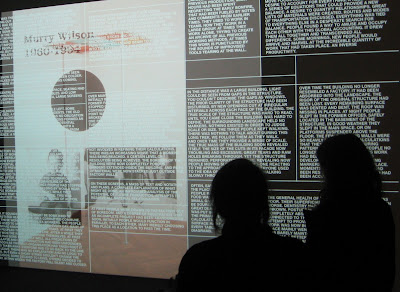 fragments exhibited recently by Gillick in the Guggenheim exhibition theanyspacewhatever no be read as accidental illustrations of Jameson’s point? Do they not seem singularly unwilling to function in any other way than as abstract advertising slogans for Gillick’s practice?

"It may seem willfully perverse and deliberately anachronistic to raise such questions—which may or may not be rhetorical—in the context of a publication on Liam Gillick. In contemporary art magazines, and even more in catalogs and related publications (even if they are termed “critical readers”), discourse is likely to be positive and celebratory; criticism tends to become highbrow copywriting. When debates do take place, they are often thinly disguised jockeying for positions and symbolic capital. Boris Groys has suggested that the only effective contemporary form of judgment lies in the decision whether to write or not to write about an artist since any published criticism is likely to be neutralized as proof that the artist’s work is “controversial” and therefore important or relevant—and if it is embedded in a publication sanctioned by the artist, its role is compromised from the outset. However, to join the conspiracy of silence seems the greatest compromise of all. Any text— or object—with discursive qualities is a message in a bottle, a missive to unknown addressees; potential discourse waiting to be actualized in the form of a response, a rebuttal, an appropriation or détournement, a sounding of its use value. Perhaps an art criticism that tries to think with as well as against and beyond its immediate object can still develop an efficacy of its own, sometimes."