Issue no. 66 of the New Left Review (November/December 2010)contains my essay "Playtimes" (pp. 125/140). The text grew out of a talk I gave in a seminar on games and play organized by Eric de Bruyn in 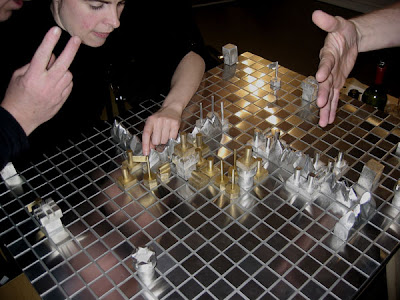 Groningen, and like many recent texts it is part the work on my book-in-progress History in Motion, on the representation and production of history through moving images in film, video, and performance.

"Playtimes" discusses various moments in history of the theory of play - of play as something opposed to modern capitalist society, as an activity more at home in the distant past or in a possible future. From Schiller to Kaprow and from Huizinga to Debord, play was seen as an anachronistic presence in modernity.

This essay analyses various forms that such theorizing took, from early Romantic-Idealist utopias and their collapse in the later phases of the French Revolution and during the Restoration to Huizinga´s conservative pessimism and neo-avant-garde´s attempts, in the 1950s and 1960s, to unleash a revolution of play unhindered by rules - of play freed from any basis in conventional games.

By now, play seems to have caught up with the present, or vice versa; post-Fordist capitalism seems to have made a "ludic tun" echoing that of the 1960s neo-avant-garde. But if the modern theory of play is itself something of an anachronism in the age of game studies, this text argues that it may be a productive one.

Image: Rod Dickinson´s version of Debord´s Game of War, made for Class Wargames.