Issue no. 76 of HTV De IJsberg, a.k.a. the HTV, a free Dutch art paper, is dedicated to the effects of neoliberalism on art. The catchy title is "Liberticide," which the editors also used for a Dutch-language collection of essays published by Uitgeverij IJzer. I contributed a textual readymade, accompanied by the following introductory note: 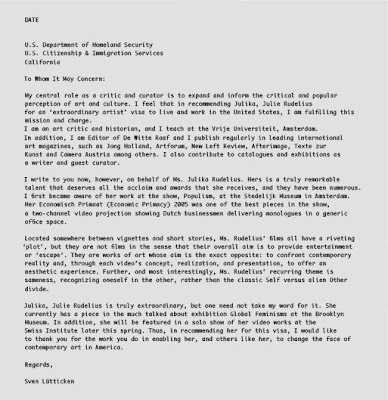 "In 2007, Julika Rudelius asked me to sign a letter written by an American lawyer. In the letter, an art critic with my name asks the U.S. Citizenship & Immigration Services to give Julika an ‘extraordinary artist’ visa. The lawyer’s prose was cringe-inducing, and I did not recognize myself at all in this grotesque doppelganger of mine. However, I assumed that Julika’s legal eagle knew what kind of letters  US bureaucrats like to read, so I gave him (and her) carte blanche, only suggesting that it might be tactically wise to remove the mention of the New Left Review from the text. In stark contrast to the global travels of commodities, including works of art, the movements of even relatively privileged people are subjected to ever stricter constraints—never mind the movements of those who have no access to western lawyers and their literary talents. Set in an alternate universe, populated by distorted alter egos, this text reenacts this everyday drama as an obscenely amusing farce."

The letter falsely claims that I am an editor of De Witte Raaf, which at that point was no longer the case. Not correcting factual errors was part of my hands-off policy, but the editors of the HTV repeat this claim in the author's note, which suggests that - in spite of my introduction - my uncanny double is doing what doubles do best: spreading confusion.