Work in Progress: Idols of the Market

Several posts on this pseudo-blog are labelled "Idolatry"; the texts in question pertain to a book that will be published early in 2009 by Sternberg Press. Idols of the Market: Modern Iconoclasm and the Fundamentalist Spectacle reexamines the legacies of modern theoretical and artistic iconoclasm in the context of the current religious-political image wars. 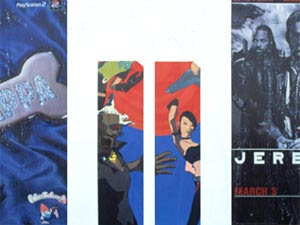 In a letter written shortly after Adorno’s death, in which he attempted to explain why his friend had not been buried according to Jewish rites, Max Horkheimer claimed that critical theory was based on the Second Commandment – the ban on representations of God or, in more fundamentalist interpretations, of representations of all living beings. In the 18th and 19th centuries, the monotheistic concept of idolatry had been gradually replaced by modern conceptions of myth and mythology; later it was integrated in critical conceptions of commodity fetishism, ideology, the spectacle, or Adorno and Horkheimer’s culture industry. This secularization of the concept of idolatry is now increasingly being revoked; the critique of the spectacle is seemingly "resacralized" by various religious factions.

The fundamentalists’ apparent fetishization of their religion’s aboriginal essence is rather questionable; their fight of the idolatrous spectacle takes place within this spectacle and fortifies it—all the while reducing the space for critique and dissent. This book examines both the afterlife of religious elements in modern culture and possible responses to the current religious reappropriation of this critique of modern capitalist culture by both Christian fundamentalists and radical Islamists. Rather than dismissing monotheistic idolatry critique, the aim is to once more set free its (self-)critical potential, in opposition to those “Enlightenment fundamentalists” who save the status quo by creating a manicheist opposition between the secular West and the pure otherness of Islam.