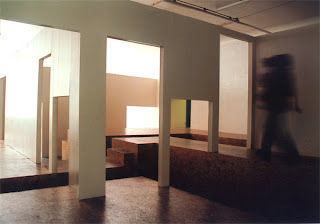 ons and sculpture in combination with his photographs of a variety of sites and structures—including miniature golf courses. The book also contains my essay Krijn de Koning: Ruining Representation, which was written at an early stage of the book's planning, and which therefore is not quite the text I would write today. It analyses De Koning's practice in the context of art institutions as spaces of representation and abstraction. Some samples:

"Krijn de Koning’s 2001 installation at Begane Grond in Utrecht was one of his most complex works. After the show, which included interventions in De Koning’s structure by other artists, this exhibition space closed in order to be completely renovated; it later reopened under the name BAK. Cutting away some of the raised floors of the main space and adding floors of his own making, De Koning made the space rather more difficult to navigate and to understand, with awkward differences in height and strange passageways. Such works by De Koning give an irrational, Piranesian twist to the work of post-Minimalist installations artists such as Daniel Buren and Michael Asher, who in the late 1960s and 1970s came to use the gallery space not merely as a medium in which to present works executed in other media, but as the primary artistic medium. Far from merely using this medium of representation, they reflected on it; the installation became a mise-en-abîme of the gallery space itself as the medium of representation. While obviously taking up aspects of such practices, De Koning seems less interested in analyzing sites than in ruining them. De Koning’s work is reverse archaeology: it does not peel away layers to lay bare buried ruins, it adds one or more layers in order to turn what is there into a ruin."

"Even though the white cube has become the primary artistic medium in the age of installation art, the art context is no mere constellation of gallery spaces; it is a discursive context, and as such it can be exported to non-art spaces. Artistic interventions transform these sites; the artworks function as de facto white cubes, abstracting and derealizing the site, transforming it into its own representation. As Bas Heijne has pointed out, the work in Hilversum is a reversal of the traditional ruin dear to the Romantics; rather than a human structure (such as a castle) being invaded by nature, nature itself is being invaded and ‘ruined’ by a human structure. However, De Koning’s works function in a similar manner in an architectural context, particularly in art spaces. The effect is that of one culture ruining another one: De Koning’s interventions literally turn sites into ruins, rather than constituting romantic and, in the end, comforting meditations on ruins.

"In 2001 De Koning created an installation for an abandoned hôtel in Metz, formerly a music school, which awaited its restoration as a FRAC (regional art centre). The building was already in ruins, but De Koning’s structure exacerbated this status by making it look like the relic of a long defunct culture with forgotten conventions. De Koning inserted a central yellow volume in the courtyard, with an open roof and windows looking out onto rather uninteresting walls; from this central body, red tunnels led into parts of the building, penetrating through doors and windows, and offering views of the dusty and empty interiors. In a typical De Koning gesture, a washbasin ended up under the tempo 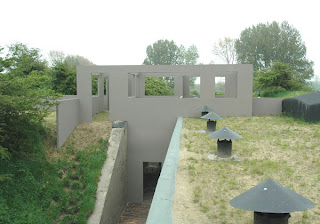 rary floor, the boiler and tap now suspended over an abstract red plane. His floors and walls seem to take no heed of the existing fixtures and ornaments; they cut them in two or make them disappear, as if human use and occupation of the space are irrelevant.

"De Koning’s approach to this not-yet art space highlighted its impending transformation into a medium of representation by turning parts of the ruined hotel into framed images. The piece emphasized the ruined condition of the site by creating a structure that responded to it in subtle and intriguing ways while maintaining a certain bluntness and strangeness. If the building in Metz was still awaiting its transformation, the Fort bij Vijfhuizen had just been renovated and transformed into an art centre when De Koning’s Beeld voor Vijfhuizen (2005) was installed on top of this early- twentieth- century army barracks, part of a defensive ring around Amsterdam. On top of the concrete edifice, De Koning erected an equally grey temporary pavilion, a grid structure whose large openings turned it into a quasi-panopticon offering a variety of views of the surrounding landscape. While the spaces beneath—though stripped down and renovated—still betray their former function, De Koning’s structure took this process of abstraction, which is part of any transformation of non-art spaces into exhibition spaces, much further."