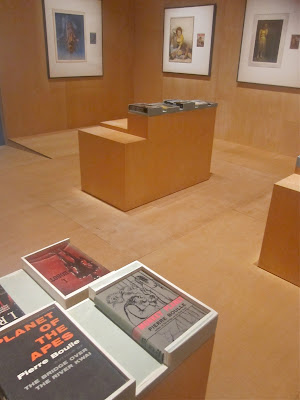 Texte zur Kunst no. 83 (September 2011) is dedicated to the collector—or more particularly that new breed, the contemporary mega-collector, a global player in an expanding market—going hand in hand, in Europe, with shrinking public funding--that has transformed the art world beyond recognition. I contributed a review (pp. 237-241) of Richard Prince's exhibition American Prayer at the Bibliothèque Francois Mitterand—the BnF’s sprawling fortress by the Seine. While this review is not part of the thematic section, it complements, for Prince's show showcased the artist-as-collector of books, manuscripts and cover art. From the review:

It is clear that the expansion of the art market since the 1980s has allowed Prince to collect not only first editions but also manuscripts on a grand scale. Perhaps it is only fitting, given the ascendancy of the curator in the neoliberal culture industry, that the role of artist and collector seem to be become ever more indistinguishable in Prince’s case. However, this erasure of borders makes odd class distinctions come to the fore: class distinctions between the books themselves, some of which are treasured as fetish-objects while others are integrated into the American English pieces; and between Prince and the viewers, some of whom may have similar interests but dissimilar budgets. As an art of conspicuous collecting, Prince’s work is implicated in the wealth redistribution from bottom (and middle) to top that marks the current phrase of capitalism. Few can afford Burroughs’ letters or Hunter S. Thompson’s manuscripts, and even when one finds a book that one owns oneself, Prince’s copy will invariably be more mint. Such social comparisons befit an exhibition that makes connections and comparisons by the dozens, from the explicit (UK version next to US version, cowboys next to cowboys, Brooke Shields next to Brooke Shields) to the gnomic."