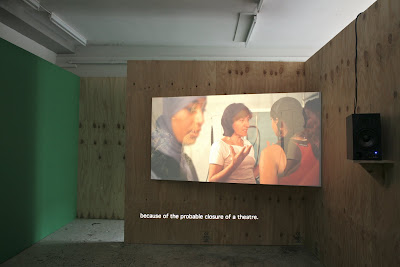 the Art of Projection essay, is now a more or less finished part of my History in Motion book project. Other chapters will deal with the dialectic of suspense and shock, with the ideology of play, with television and performance, with unnatural history, and (finally) with revolution and the event.

Transforming Time constitutes a specific take on the rise of film and video art in the last few decades. The focus is on art that I call "cinematic," which is to say that it exists in relation to the history and conventions of the cinema, regardless of whether the artwork in question uses actual film as its material substrate or, for example, video.

Against the background of theoretical analyses of the regimentation of time under capitalism by thinkers such as Debord and Negri (the latter is also interviewed in this issue of Grey Room) Transforming Time explores ways in which various works of cinematic art intervene in the dominant temporal regime, constituting momentary transformations and possibly liberations of time. Artists/directors discussed in the text include Godard, Joseph Cornell, William S. Burroughs and Brion Gysin, Stan Douglas,and Günther Förg; the final section focusses on Harun Farocki, Allan Sekula and Wendelien van Oldenborgh, all with works that constitute cinematic reflections on the factory.