I served as co-editor for the September issue of Texte zur Kunst, "Life at Work." This is André Rottmann's final issue as editor. It has been a pleasure to collaborate with André these past few years, and he seems to have dealt with the strain of processing my last-minute edits of translations and rewrites of edits remarkably well. Freed of his editorial burden, André will now be able to focus on his 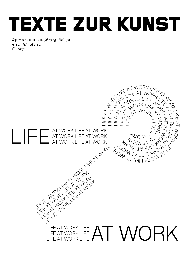 PhD thesis and other writing projects. Luckily, his final effort at Texte zur Kunst is a strong, coherent and stimulating collection of contributions by some of the most interesting authors and artists working in the US and Europe today (and by me). To conjure with some imaginary statistics: I'd say that whereas the abstraction issue, my previous stint as guest editor, was 75 % successful, this time around we're nearing the 95 % mark.

In modern and contemporary aesthetics, the relationship between art and life is as crucial as it is problematical; this issue seeks to re-examine this unavoidable pairing, with a focus on performance art and post-Fordist immaterial labor. It contains essays by Eric de Bruyn, Sabeth Buchmann, Paul Chan, Branden Joseph, Rachel Haidu, and well as my own text "Acting in the Age of Performance" and a conversation between Hito Steyerl and myself on objecthood and subjectivity. My own essay, "Acts in the Age of Virtuoso Performance" (German version pp. 36-53, English version pp. 124-132), starts with Allan Kaprow's notion of the artist "changing jobs" in order to become a beach bum or a politician; I relate Kaprow's idea to Harold Rosenberg's writings on the act and his concern that the act was absorbed and neutralized by events. This is the background for a discussion of the contemporary regime of performance:

"We live in a culture of performance, and this 'performance' is as ambiguous as Rosenberg’s “acting”, standing both for one’s quasi-dramatic self-performance and for one’s economic achievement—and increasingly, the former is essential to the latter. If the act of old was, in theory, its own norm, contemporary performance constantly tries to meet external targets. To act is to move beyond one’s previous identity and position, whereas to perform is to 'get with the programme,' to be in the event, to readjust and recalibrate. To act is to step beyond the now; to perform is to extend the now, to prolong the present. But this need not be a static opposition. What is a failed performance if not an act, whether intentional or not?

"Using the term 'virtuosity' to refer to “the special capabilities of a performing artist”, Paolo Virno stresses that virtuosity is 'An activity without an end product: the performance of a pianist or of a dancer does not leave us with a defined object distinguishable from the performance itself, capable of continuing after the performance has ended.' On some basic level, all of us are virtuosos, even if we are clumsy virtuoso; speaking is the most basic act of virtuosity. Of course, the term is traditionally associated with great opera singers or musicians; but while artistic and intellectual labor long were exceptions within developing industrial capitalism, Virno notes that 'Virtuosity becomes labor for the masses with the onset of the culture industry. It is here that the virtuoso begins to punch a time card.' Time cards, of course, have become an anachronism; the screenwriter 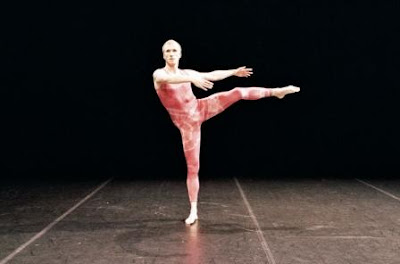 working for one of the classic Hollywood studios in the 1930s or 40s had to subject to this temporal regime, but the contemporary freelance writer is on duty all the time.

"In a number of interconnected and overlapping texts, Jan Verwoert has reflected on the problematic position of the act in a society marked by the pressure to perform: 'Where do the barricades stand today, anyway? We are the avant-garde, but we are also the job slaves. We serve the customers who consume the communication and sociability that we produce. We work in the kitchens and call centres of the newly opened restaurants and companies of the prospectively burgeoning new urban centres of the service society. To offer our services we are willing to travel. Being mobile is part of our performance. So we travel, we go west to work, we go north to work, we are all around, we fix the minds, houses and cars of those who stay in their offices […] What would it mean to put up resistance against a social order in which performativity has become a growing demand, if not the norm? What would it mean to resist the need to perform? Is ‘resistance’ even a concept that would be useful to evoke in this context?' What Verwoert proposes is basically the development of strategies for turning performances back into acts, for making the leap from the implementation of an economic imperative to forms of action – that may in fact take the form of choosing not to act. While this could certainly be the nucleus for an ethic of performance, individual ethics need to be placed in a constellation that would ultimately delineate a political-aesthetical project.

"Jérôme Bel’s choreography Cédric Andrieux (2009) is part of Bel’s series on individual dancers, who tell the audience about their lives and dance extracts from various pieces. Cédric Andrieux danced for Merce Cunningham for years; when he dances extract from pieces by Cunningham and others, there is no music; his breath is clearly audible, stressing the intense labor required for performing Cunningham’s choreography – which, as Andrieux emphasizes, regularly push dancers to and beyond the limits of their possibilities. Practice with Cunningham was a 'slow and laborious process'; the nearly impossible things Cunningham demanded resulted in a feeling of humiliation, as Andrieux cannot keep torso in a strictly horizontal position; when balancing on one leg, he makes little jumps so as to not loose balance. During daily practice, Cunningham had the dancers do the same exercises every morning. Noting that it was a Cagean 'zen thing' for Cunningham, a way of emphasizing that every moment is unique and that there is in fact no such thing as repetition, Andrieux adds that 'For me, mostly it’s totally depressing.” The performance is not, however, some kind of debunking exercise. Andrieux notes that Cunningham never remarked on mistakes, stressing that “it’s when movement starts to be awkward that it becomes interesting.' Still, the dancer mentions his relief upon leaving Cunningham and shedding the dreaded 'unitard' outfit. He wore more comfortable clothes and experienced less physical pain dancing for Trisha Brown or 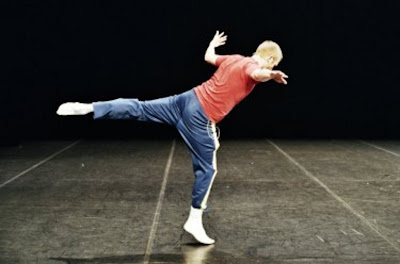 Jérôme Bel—with the latter, 'We are people before we are dancers.' Repeating Cunningham’s repetitions, Andrieux examines himself as a quasi-subject and quasi-object, as body in perpetual training.

"Cédric Andrieux examines the labor behind and in the dance; it is performative treatise on the aesthetico-political economy. Bel no longer looks for life elsewhere, à la Kaprow; he locates it in the practice at hand. Nor does he engage in an ultimately empty celebration of the artistic act as free and therefore universal, as a mythical substitute for political action, à la Rosenberg; instead, he examines artistic acts as being universal precisely in so far as they are concrete examples of contemporary labor. To be sure, to the extent that such a practice becomes hardened fact, becomes a defined oeuvre, it also needs to be negated – with precision, with attention to its specific successes and failures. To this end, it needs to be put in a provisional montage with other performances – performances that may or may not be art, but that together form a constellation of acts that evince various admixtures of forethought and improvisation, of refusal and over-acting, of planning and breakdown."

Edit: a PDF of my essay has been posted here.