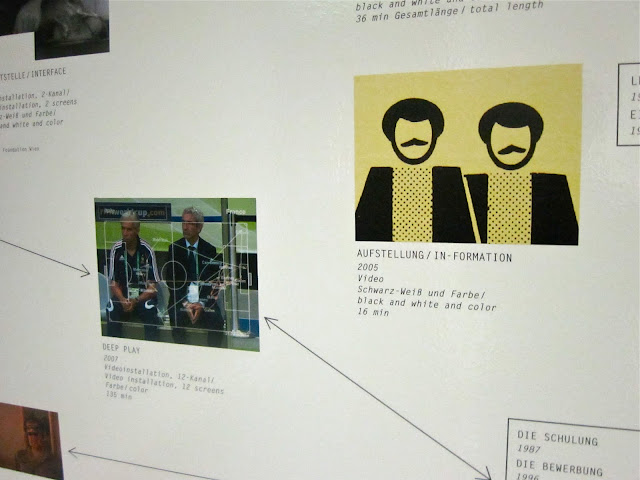 Issue no. 77 of Texte zur Kunst contains my review of the Harun Farocki exhibitions in Cologne and London (English version pp. 155-158, German version 233-239). Here are the opening paragraphs:

"Two simultaneous exhibitions of Harun Farocki’s video installations, at Raven Row in London and Museum Ludwig in Cologne, amount to two variations of a small-scale retrospective of this body of work. One show is, as it were, a replay of the other, swapping some elements for others and establishing a somewhat different constellation of works – creating a different diagram of Farocki’s pieces for art spaces. Both exhibitions are accompanied by screenings of Farocki’s films for the cinema and television, but the shows themselves focus almost exclusively on the gallery pieces he started making in 1995, in response both to the worsening conditions for independent film production and distribution and to specific possibilities offered by exhibition spaces. With a few exceptions, most of these gallery works consist of two or more channels (either projected or on monitors).

"The Raven Row exhibition is accompanied by a solid publication, with a number of insightful texts both by Farocki and others, that will remain a benchmark for some time to come. By contrast, the Cologne show comes with by a small cahier containing the German translation of an autobiographical text by Farocki from the British volume, with a fold-out poster that (on one of its sides) sports a diagram which can also be found on a wall in the museum. This diagram contains titles and images of the works in the Ludwig show plus the titles (but no images) of non-gallery films that are shown in the screenings. Most of these elements are connected by arrows pointing either in one or in two directions, though sometimes pieces are placed in each other’s vicinity without any such physical contact. Sometimes these connections are very direct: a gallery piece such as Auge/Maschine III/Eye/Machine III (2000), shown at the Ludwig, uses some of the same material, and covers similar ground to, the single-channel film Erkennen und Verfolgen/War at a Distance (2003).

In a less direct way, the recent double projection “Immersion”, which shows a demonstration of a computer program with which traumatized US soldiers can relive their experiences, is connected both to the documenta 12 installation “Deep Play” and to non-exhibition films such as Die Schulung (1987) and Die Schöpfer der Einkaufswelten (2001). With the former, they share the investigation of technology, with the latter, the element of the rehearsal of roles and the “programming” of behavior. The connections in this diagram do of course represent a choice, and thus a reduction; they make visible certain connections by obscuring others. A text analyzing the Farocki shows cannot help functioning in a similar way."

Image: wall diagram at the Ludwig.