The September 2007 issue of Artforum contains my review of a Thomas Demand exhinbition in Venice (pp. 403), as well as Event Horizon, a short essay / review of Gerard Raunig's book Art and Revolution (pp. 83-87). I titled the piece Retro Revolution, but evidently Artforum considered that title to be inferior. The opening paragraphs:

"Revolutions are short-lived, ephemeral events that shatter the continuity of history yet persist in acts of remembrance—official or alternative, pro or contra, systemic or incidental. However, the recent surge in 'revolutionary' pop-cultural iconography, from the ubiquitous Che to the imagery and slogans of May ’68 and the Red Army Faction, seems designed to sabotage, rather than perpetuate, remembrance. In contrast to the nostalgia culture of the ’70s and ’80s, as analyzed by Fredric Jameson, which focused on pilfering the popular culture of earlier decades, today’s nostalgia industry also embraces more political material, but with a similar end result: amnesia masquera 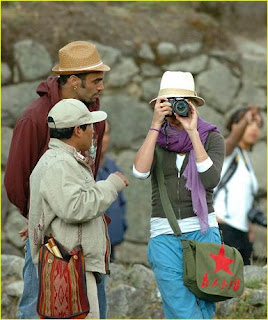 ding as anamnesis. Fragments of history return as decontextualized signifiers that suggest little more than fashionability—until, that is, they end up in a situation in which they regain something resembling actual meaning, as when Cameron Diaz explored new dimensions of obliviousness by sporting a bag with a red star and the Maoist slogan SERVE THE PEOPLE (in Chinese) during a visit to Peru, a country still scarred by the Maoist insurgency of the Shining Path.

"In the context of this nostalgia culture, which locks possible futures safely in an unretrievable past, the always-slippery relationship between 'art' and 'revolution' feels more vexed than ever, and in need, once again, of reconceptualization-particularly since two once-dominant narratives of this relationship are now thoroughly discredited. First there was the notion of formal revolution, the transposition of Hegelian-Marxist principles to art, as evinced in the criticism of lapsed Trotskyist Clement Greenberg and his pupil Michael Fried. In the 1960s, Fried claimed that the 'dialectic of modernism' amounted to 'nothing less than the establishment of a perpetual revolution-perpetual because bent on unceasing radical criticism of itself. It is no wonder such an ideal has not been realized in the realm of politics, but it seems to me that the development of modernist painting over the past century has led to a situation that may be described in these terms.' This formalist formulation was challenged by another: the neo-avant-garde dream of a fusion of art and life, which necessarily presupposed the imbrication of art production and political action and, in its seemingly most radical version, proposed the abandonment of artmaking in favor of revolutionary activity. With its naive conviction that the revolution is just around the corner, and with its willingness to throw out the baby of art with the bathwater of capitalism, the latter variant now seems at least as unconvincing as the modernist narrative. And yet, no coherent new theorization has appeared to take its place. Austrian philosopher Gerald Raunig's Art and Revolution, published in German in 2005 and now available in English, represents to date the most sustained and substantial—although substantially flawed—attempt to fill this vacuum. "