Julika Rudelius: Looking at the Other is the catalogue of the artist’s solo show at De Hallen in Haarlem, The Netherlands (December 2005-February 2006). It contains my essay “Cinema’s Doppelgänger: Remarks on Two Works by Julika Rudelius” (pp. 5-19), which analyses her work in the context of different forms of multiple projection, in art and film history: 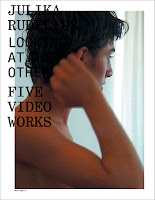 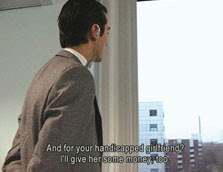 “ Tagged (2003) and Economic Primacy (2005) are two closely related works by Julika Rudelius. Economic Primacy is a double projection in which Dutch businessmen expound their convictions and prejudices, whereas Tagged focuses on young men, mainly of Moroccan descent, and all living in Amsterdam. Tagged consists not of two but of three aligned and immediately adjacent projections, but the general structure of the works is the same. Both show members of a group who share certain values and a habitus, and in both cases the members of this group are shown in an abstract, generic space: a bare hotel room in Tagged, and a bland office in Economic Primacy. In both works, a shot usually shows only one person in this interior (in Tagged there are brief shots of two boys together). Double or triple projection enables Rudelius to practise a kind of synchronic montage that establishes connections between the various protagonists, between two or more images – in addition to the diachronic montage between two shots within one and the same projection. While the coexistence of these two forms of montage is by now rather common, as multiple projection is ubiquitous in contemporary video art, the way in which Rudelius deploys double and triple projection is specific to her practice.”