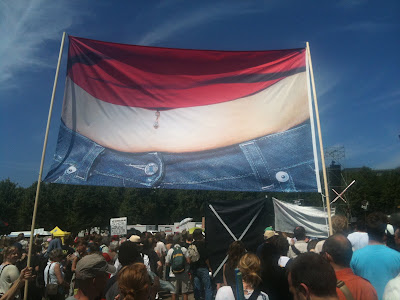 The demonstration in The Hague against disproportionate, arbitrary and punitive cutbacks was a predictable failure in that it did not sway parliament. Zijlstra's plan was debated in the Second Chamber immediately after the demonstration ended officially. A smaller, unofficial demonstration moved from the Malieveld, where the large gathering had taken place, to the parliament buildings at the Binnenhof - where charming encounters with the riot police ensued. As was to be expected, the debate did not see the government budge on any of the major issues. A few symbolic sweets to the provinces outside the metropolitan Randstad area, but that was about it. All the institutions and media that have been mentioned before remain under acute threat.

That being said, the demonstration was a success in that it gathered seven to ten thousand people and instilled in them (well, perhaps not all of them, but lots of them) the need to engage in long-term activism that cannot simply be a fight for funding. Rather, they have to attack this coalition in its entirety, on points ranging from the crusade against halal meat to a flurry of measures that increase social inequality - and attack it with acts of the imagination that forge new social montages. Consensus-driven polder culture has been dead for some time now, and it is now patently clear that clinging on to the illusion of "business as usual" is no longer an option. (See also Dominiek Ruyters's piece on the Metropolis site, in Dutch.)

Of course, the material basis for a lot of crucial practices is still being undermined. It remains to be seen to which extent intellectual and artistic life will remain viable in the land of Wilders. That they will morph and mutate is certain.